‘Around the World in Eighty Recipes’ is a series of authentic regional recipes cooked and explained by local friends from all over our beautiful and precious planet. Discover the second chapter of this gastronomic-world-trip and discover Bulgaria as well. If you want your country to be featured don´t hesitate to contact us!

When it comes to organizing a dinner with Colombians don´t expect to do something easy and chill. You´ll find yourself surrounded by at least five people, all of them cooking, and all of them with their personal theories about how to cook properly: one person will approach to the pot and add salt, then someone else will add a slice of bread to take off the extra salt, then another one will arrive and take off the bread because it´s perfectly salty, then another one will put the bread back and so on for the rest of the evening.
Julian, one of our hosts, tod us that the first time he introduced his British wife, Gemma, to his friends, they were exactly in that kind of salt/bread situation going on, and Gemma told him: “Here nobody knows what´s doing!” So he replied to her “well, then go and help them!”. And she ended up in the kitchen with everybody else and the pot of contention.

In the same way, as everybody has his own preference about the salt level, they have as well different opinions about what could be the most Colombian dish.
According to Julian – who is from Pasto, in Southern Colombia on the Andes Cordillera- it could be the Sancocho or the Ajiaco, both of them soups made of meat and different vegetables and roots.
On the other end, Bea – a miniature girl from Armenia, a city in the middle between Medellin, Bogotá and Cali – picks as her favourite top three Chicharrones, Arepas and Bandeja Paisa, a dish of frightening dimension which features red beans, pork, fried egg, plantain and many more elements as you can’t count.

Even if each one of this gastronomic specialities was triggering our foodie curiosity, we were supposed to choose one winner, which was the one suggested by our Medellin-ambassador, Mariana: fried fish with coconut rice and patacones. A traditional combination of divine food that comes directly from the Pacific coast of Colombia.

Now, unfasten your belts and prepare yourself for this Colombian feast!

First of all clean and scale the fishes. Then grate the zest of 3 green limes, avoiding the white inner part f the peel, as it would get a bitter taste to the final mixture.
Take the 3 garlic cloves and cut them into circles and then crumble them.
Mix together in a bowl the garlic, grated lime zest, the juice of the 3 peeled limes, salt and a teaspoon of sunflower oil.
Brush each side of the fishes with this mixture and place them in a spacious bowl. Now squeeze the remaining limes and mix the juice with a tuft of chopped parsley. Pour the juice and parsley on the fishes and let them rest.
(*at this point we suggest you start with the preparation of the coconut rice)

Once the patacones and rice are ready you can fry the fishes: dust the fishes with flour and fry them in a large pan with sunflower oil for 3 minutes on each side.

Keep the marinade juice to make the gravy at the very end!

Peel the plantains making a long cut along the vegetable (or fruit?!). Cut it into thick slices of the width of 2 fingers getting about 5 pieces from each plantain. Fry those slices for 3 minutes in sunflower oil or in coconut oil.
When the pieces of plantains are still hot place them in the middle of a plastic sheet (like a freezer bag) and squash them with a pataconera (the silver round thing in the picture below, also called arepera of you are making arepas), if you don’t possess this tool go to Colombia and buy one or simply use two plates. In this way, the sliced plantain will turn into a sort of circle.
Once you have made all your little discs you have to fry them again, this time for about 5 minutes, until they get a nice golden colour. Put them on some paper towel and salt them.

Tip: in this recipe we present the patacones as a side dish, however they work more than well also as a main dish, serving them with anything you like on top, like ceviche, chicken with guacamole or pulled pork. (Mariana…we’ll never be enough grateful to you for introducing us to this foodie marvel!)

Pour half of the coconut milk in a pot and cook it at a low temperature to reduce the milk and until it gets a caramel colour.
Once the coconut milk gets warm, add the remaining milk and keep it always on a low temperature. Remember to stir it every now and then to avoid it getting stuck on the bottom of the pot.
When it starts bubbling and the colour changes to dark brown you have to lower the down the temperature.
From now on you will start to see little fatty brown bubbles forming in the coconut milk.
(*This is called Titoté: in Colombia, you can buy it tinned; outside of Latin America you’ll have to make it yourself!)
When it looks like it is burning and it has exactly the same colour as caramel you have to stir it gently and add the raisins while you keep stirring for a couple of minutes.
At this point, you have to quickly take the pot from the heat, as it is a matter of seconds to actually burn everything.

At this stage, you can add the rice: 1 cup of rice and 2 cups of water for each person. Stir everything, so the rice can get all the flavours and then add 3 spoons of salt and 3 spoons of brown sugar (or panela if you can find it).

Keep cooking the rice for about 30 minutes at a low temperature, until all of the water has evaporated. Cover the pot and remember to stir it often.
A little tip: once the rice is almost done, cover the pot with a kitchen towel for about 5 minutes.

Note: raisins, of course, are not mandatory!
Quirky fact: apparently, as Bea explained us, some people add Coca-Cola instead of sugar…better not to further analyze this information…

Last but not least: The Gravy

Heat the juice left from the marinade of the fishes in a pot and add butter (100 gr) and as much salt and pepper as you like.
When the butter is completely melted add 1/2 glass of white wine, let it cook for about 10 minutes since the moment it starts to get hot.
The gravy doesn’t have to be very thick, we suggest to keep it a bit liquid and add some fresh parsley or coriander at the end.

Now you can set a radio on some good Colombian music, our hosts suggested us some traditional music from the coast, like Currulao or Mapalé: the favourites of Colombian grandfathers! 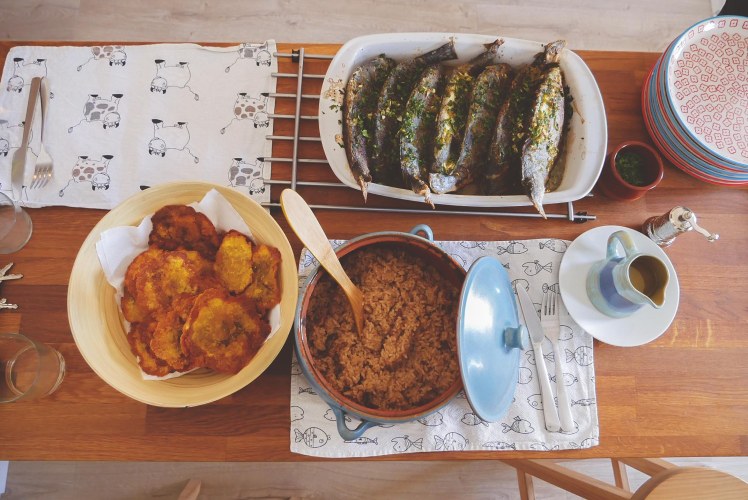 All pictures by Julian Chamorro

One thought on “Around the World in Eighty Recipes. Chapter I: Colombia”