Catalonia has much to offer to a curious traveller. Besides the popular city of Barcelona or the crowded beaches of Costa Brava, there are countless beautiful spots all around the region. The only thing you’ll have to do is grab a map and discover the most rural soul of Catalonia.

We’re living in Barcelona since more than 2 years, but we’re just starting to explore our surroundings. If you are based in the Catalan metropolis – or even if you are just spending few days there – it doesn’t take much time to reach either the seaside, the mountains or the countryside. For our first expeditions to the inner heart of this reach and beautiful region, we have decided to head to a county called Garrotxa, which is only 2-hours drive from Barcelona and 1-hour drive from Girona.

We spent there a weekend, a kind of express trip, but still enjoyable and fascinating. We choose to stay in a rural house nearby the little town of Sant Joan Les Fonts booked through Airbnb and rent a car through the app Drivy, but there are many hotels and camping spots all over the region. In case you are looking for a kind of more fashionable travel-style, we would recommend having a look through the options offered by the website of Petits Grans Hotels de Catalunya, which features structures that bring together relax, charm and bucolic life.

On the first day, a Friday night, we arrived at the rural house about dinner-time. As we are totally food-obsessed the first thing we wanted to do was having dinner. Indeed, the Garrotxa is famous for its cured meats, and even though we’re vegetarian at home we can’t say no to a local deli while travelling.
So we went to the nearest restaurant, and we couldn’t have been luckier. It was called La Font del Grevol. When we arrived there was only a huge table, probably of friends or relatives of the owners and just a couple of dogs and kids running all around.

While we were trying to understand the menu – only written in Catalan – the cook approached us. She was an old and friendly woman (a guarantee of gastronomic success), who saw that we weren’t sure about what to order. So she said to us, “Just order some bread with tomatoes and a second dish”. We trusted her and followed her advice.
She came back with a huge mountain of bread, garlic and tomatoes (that you have to smash on the bread slices by your own…so much fun!) and a gorgeous wooden stand full of local cured meats and cheeses: exactly what we were desperately wishing! 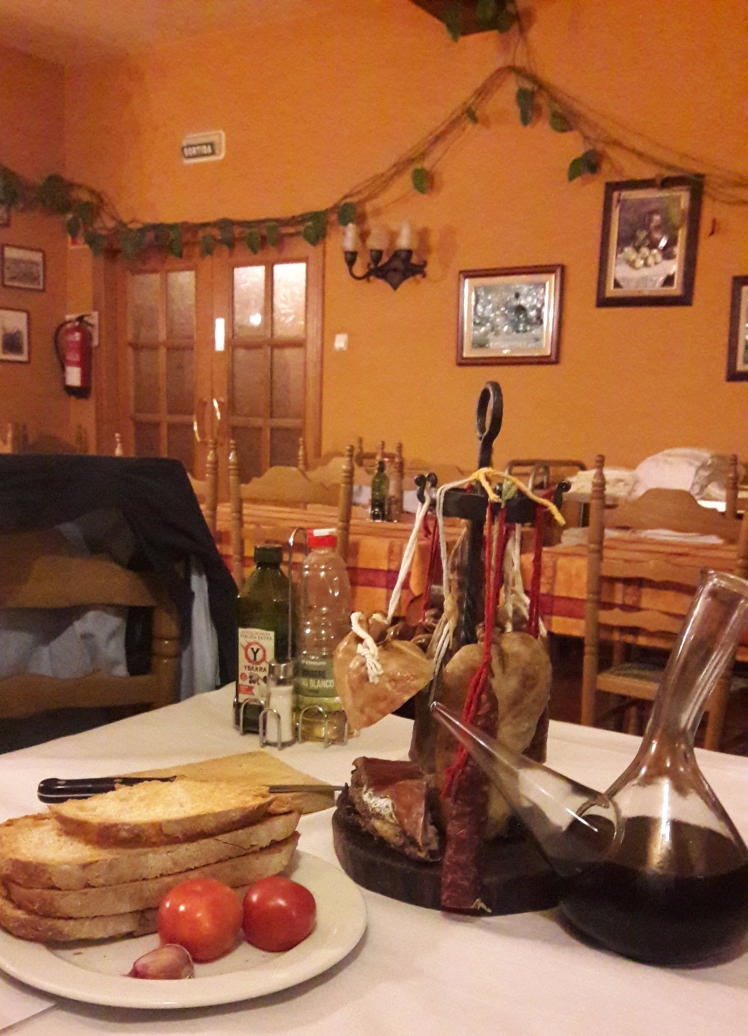 Honestly, we don’t remember what we had afterwards…the starters were so delicious that it is worth to visit this restaurant just for them!

Saturday morning we had breakfast in the garden of the rural house where we slept, having some coffee and homemade little crostatas (made by Paolo’s mum and sent to us, as Italian family law command).
After breakfast, we went to the main city in the area, Olot. A foodie temple, where during the weekends it’s easy to find a local fair where you can taste and buy regional products. We took advantage of this opportunity to bring some souvenirs: artisanal cheeses from La Xiquella (a local cooperative that offers also tours, tastings and accommodations) and raw-vegan sausages by VegaRaw (which has a little store even in the city centre of Barcelona!).

Olot is not only famous for its delicatessen, but also for its volcanos and it’s a perfect destination for trekking and hiking. After all, you have to burn all those calories!
The volcanos, however, are not active anymore, they don’t even exist anymore because more than 10.000 years ago they have all exploded and what is left today are their craters.
There are many volcanos that can be visited in the region, which is home to the Garrotxa Volcanic Zone Natural Park, but we choose to concentrate only on two of them: the one in the right centre of Olot, and the Volcán de Santa Margarita. The second one is a spectacular spot and it’s named after the tiny hermitage which stays in the middle of the crater since 1867 (the original one was built on 1428 but it was destroyed by an earthquake). A great destination for a peaceful and contemplative trekking. 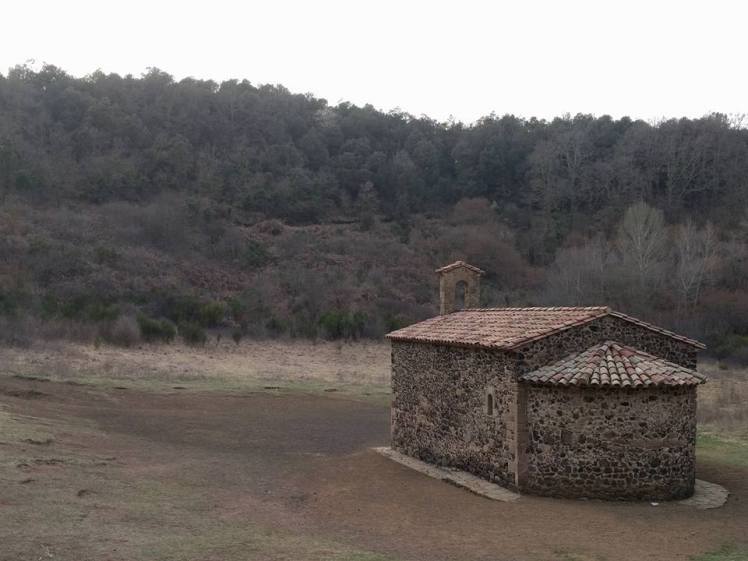 Once we left the volcanic zone and the hermitage we decided to visit some other towns in the area.
First, we went to Santa Pau, a medieval town, which is little but magical. Next time we’ll visit this area we’ll definitely think about renting an accommodation in one of its picturesque houses. 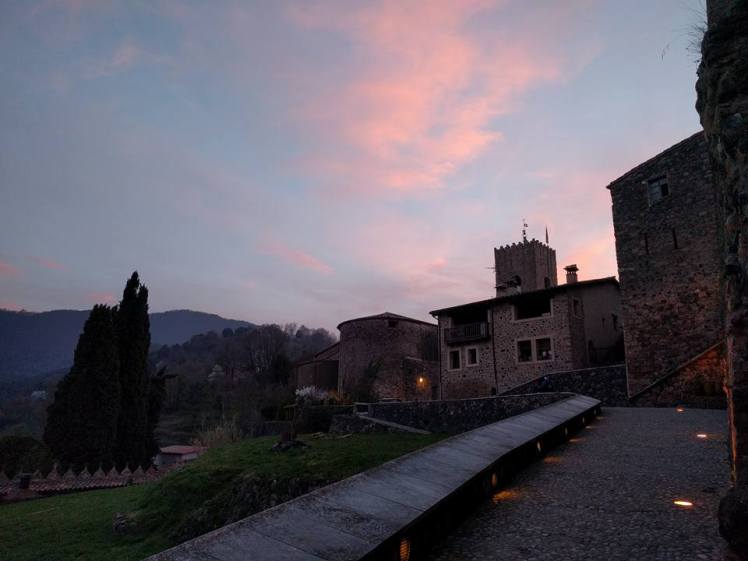 There’s one place that you have to make sure you won’t miss while visiting the Garrotxa, and it’s another medieval town, Besalú.
We spent there the Saturday night because we wanted to enjoy the calm and ancient atmosphere of this magical town with the darkness. The highlight of this little town is the 12-century Romanesque bridge, which is beautifully illuminated by night, offering the chance to have a relaxing and almost enchanted walk along the city borders and the river. A nice retreat after a hiking day spent through the paths of the natural park.

On Sunday, the last day of our short trip, we decided to took advantage of the whole day t visit some other nearby cities, before coming back to Barcelona. The good thing about the Garrotxa it is indeed that it is very close to other two famous destinations: Figueres and Girona.

When we left our rural farmstead house, we head towards Figueres, home of the Dali’s Museum.
We didn’t spend too much time here because the city was very crowded (which is not the best thing after having spent the previous day completely by our own among hermitages and volcanos). So we just visited the Dali’s Museum, highly recommended for all art lovers!
Before living the city we found a nice modern restaurant, perhaps kind of chic, but still affordable and with a friendly staff. It was the Bocam, featured by Tripadvisor as one of the 10 best restaurants in Figueres. Here we had black rice with seafood, amazingly good! But personally, we think that the focal point of the restaurant is on the deconstructed desserts: just think that we had a cheesecake presented like it was a mushroom!

After lunch, we finally went to Girona, a city that is rapidly gaining tourists’ attention because of being the set of some episodes of the notorious series Game of Thrones. By the way, you don’t need to be a GoT fan to enjoy the city, which was unexpectedly beautiful and welcoming.

This was the itinerary we followed during our express weekend in the Garrotxa. We still miss many spotlights to visit, and the trekking and camping opportunities are infinite for passionate travellers. Which means that after we’ll be back from our upcoming trip to Vietnam, nothing will stop us to visit again this delightful part of Catalonia!